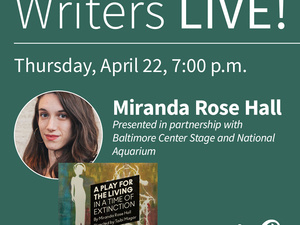 Join us for a special Earth Day event presented with Center Stage and the National Aquarium.

Miranda Rose Hall will be in conversation with a moderator from the National Aquarium to discuss the themes in A Play for the Living in a Time of Extinction.

Miranda Rose Hall (she / her / hers) is a playwright from Baltimore, MD. Her plays include Plot Points in Our Sexual Development (LCT3/Lincoln Center Theater, finalist for the 2019 Lambda Literary Award in Drama), The Hour of Great Mercy (Diversionary Theater, 2019 San Diego Critics Circle Award for Outstanding New Play), A Play for the Living in a Time of Extinction (upcoming Baltimore Center Stage), The Kind Ones (upcoming Magic Theatre), and Menstruation: A Period Piece. She is currently under commission from LCT3/Lincoln Center Theater, Yale Repertory Theater, and Playwrights Horizons Soundstage, and in 2020, she was honored with a Steinberg Distinguished Playwright Award. She has developed her work with New York Theater Workshop, Baltimore Center Stage, Woolly Mammoth, The Kennedy Center, We the Women / Center Theatre Group, Rattlestick Playwrights Theater, The Playwright's Realm, National New Play Network, Orlando Shakespeare Theater, EnGarde Arts, Provincetown Theater, Two River Theater, Cygnet Theater, Single Carrot Theatre, and the Orchard Project. She is a founding member of LubDub Theatre, a New York-based physical theater company.

Visit the Center Stage website to stream A Play for the Living in a Time of Extinction, April 15 - May 9.

ASL interpretation will be available to attendees.