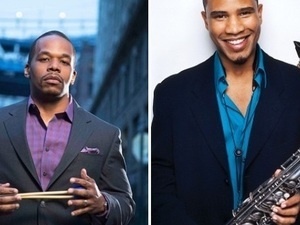 GRAMMY® award-winner David Sánchez is recognized around the world as one of the finest saxophonists of his  generation. His mastery of the instrument is undeniable and his sound unmistakable. Combine that with Sánchez's deep-seated knowledge of both Jazz and Latin music, and the traditions that mold them, and the results are extraordinary.

His recording, “Coral,"  earned David his fifth GRAMMY® award nomination and his first Latin Grammy Award for Best Instrumental Album in 2005. “Coral” features orchestrations and arrangements by prolific Argentine composer Carlos Franzetti with the City of Prague Philharmonic. The album showcases compositions by Villa-Lobos, Jobim, Ginastera, Francetti and Sánchez. All Music.com observes "Sánchez is poised to take his place among the great jazz musicians that continue to offer important personal and musical insights to their audiences". "Coral" is a necessity for any jazz or classical record collection".

"Cultural Survival", David's 2008 debut on Concord Records, earned the artist his sixth GRAMMY® award nomination. Two years later, Sánchez, Stefon Harris and Christian Scott came together for the "Ninety Miles Project." The successful album and documentary film were recorded in Havana and featured not only the three bandleaders but also some of Cuba's finest musicians. Sánchez continues to tour the world as a bandleader, bringing his mix of mainstream jazz with Afro-Latin influences to audiences around the globe. At the same time, he is also a member of The SFJazz Collective, an all-star octet representing the SFJazz organization. The Collective, has been one of the most prolific ensembles of the last decade. It's known for its stellar musicians, groundbreaking compositions and innovative takes on the music of some of the world's most influential artists.