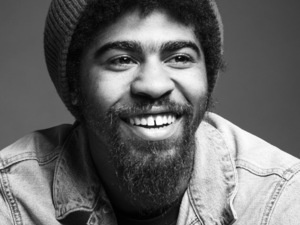 In honor of Baltimore City Public Schools Fine Arts Week, Western High School students and artists Kennedy Cutchember and Camille Lawrence co-moderate an artist talk with photographer, photojournalist, and activist Devin Allen. Join them live on Facebook and YouTube as they showcase student works inspired by Allen and discuss the trajectory of his career and the experiences that motivate and inspire his work. Baltimore City Public Schools Fine Arts Week takes place May 3–9 and features nearly 400 of the best and brightest student visual artists and performers from 90 schools. A special event will be highlighted each day in the virtual galleries at baltimorecityschoolsfinearts.org.

Devin Allen is a photographer, photojournalist, and activist based in Baltimore, MD. He gained national attention after the Freddie Gray protests in 2015, when his documentary photo Baltimore Uprising was published as Time magazine’s May 2015 cover; almost five years later, his documentary photo of the George Floyd protests made the magazine’s June 2020 cover. Allen’s photographs are held in the Smithsonian’s National Museum of African American History and Culture. His book, No Justice, No Peace, will be published by Hachette Books in 2022.

Camille Lawrence is a junior at Western High School in Baltimore City. She is an artist, activist, and student of the world. Passionate about teen mental health, Camille hopes to normalize the conversation around mental health and its importance through her art, and is also interested in philosophy, mindfulness, and meditation.

Kennedy Cutchember is a senior at Western High School in Baltimore City. She is passionate about racial injustice and gender equality and this is reflected in her artwork. Growing up, Kennedy saw and experienced racial and gender injustice and her work aims to address these issues. She uses art as a form of activism and expression to push for change in America. She is also passionate about music and this, too, bleeds into her creative expression.