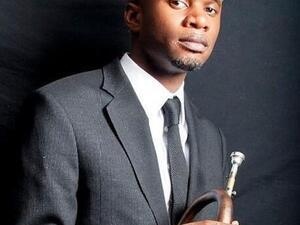 I became a trumpet player because of Clifford Brown. I heard him on the radio and thought it was the slickest ever. Joy Spring was the tune I later found out.

I played violin when I was 3 or 4 years old. When I started playing trumpet my whole view of music changed by listening to more jazz and having a wider variety of music to check out.  The trumpet is pretty difficult at times but any instrument can be, it’s all about how you look at it. If you put the time in the easier it gets. It’s a very physical instrument you have to play it daily to keep up.

I would say the two biggest impacts on my musical life are Gary Thomas, a saxophonist/ flutist and composer, his approach to music is genius and has given me a whole new approach to music. The other is Doobie Powell, a God send of a musician whose music has inspired me greatly. Keyon Harrold is probably my favorite trumpet player out now, I’ve known him since 1998 and has been incredible since then.

Theljon Allen is a native of Baltimore. He began playing trumpet in the sixth grade, attended  Randallstown High School and went to college at New School University. Since school, he has had the opportunity to play and or record with many music acts such as Ledisi, Janet Jackson, Lonnie Liston Smith, Cyrus Chestnut and many more.