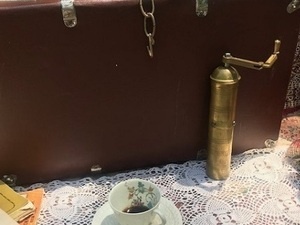 An exploration of instability, cultural roots and life somewhere in between

In this multilingual music theatre work, a woman finds a suitcase filled with history, memories, and the remnants of a life in movement...

When composer Ljiljana Jovanovic left her home in Belgrade to study music in Germany, her father’s suitcase in hand, she never imagined a journey through eight countries on three continents, as her country fragmented and neighbors became enemies. Twenty-seven years later, an unprecedented 70 million people have been forced from their homes, worldwide - over half of them, children. This work seeks connections among the journeys of those losing, finding, and reinventing what “home” might mean.

Neither concert, nor opera, nor play, nor performance art, The Suitcase/Der Koffer is influenced by all these forms, as three performers present objects, documents, events and images from the lives of the displaced, real and imagined. The composition includes sung and spoken text, improvisation and sound exploration through prepared alto sax and extended piano techniques, and the live performance is layered with prerecorded sound material - including the voices of children in many languages, bringing us fragments of other stories, other suitcases.

Jovanovic's New Music Theatre projects, chamber music, texts, site specific soundscapes, installations and sound designs have been performed and recorded throughout Europe, Canada and the US. Juanita Rockwell, writer and director of over one hundred plays, operas and multidisciplinary performance projects on five continents, was founding director of Towson University’s experimentally-focused MFA in Theatre Program..

Tickets: $15 general admission/$10 students with ID and seniors. (cash only at the door)

Tickets: $15 general admission/$10 students with ID and seniors. (cash only at the door)