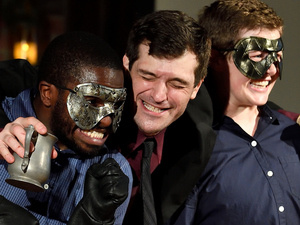 The Knight of the Burning Pestle

BSF closes their season with the Baltimore premiere of Beaumont’s under-performed gem. A sendup of courtly romance, The Knight of the Burning Pestle is the reason we stage Shakespeare’s contemporaries: Bill never wrote anything this bawdy or satirical.

A normal play about a London grocer is interrupted by the audience and rewritten on the fly to become an increasingly absurd chivalric epic that leaves no target un-pricked. Suitable for ages 13 & up.

All performances end with a cast talk-back.

Free lecture about the play given at 7pm each Saturday.