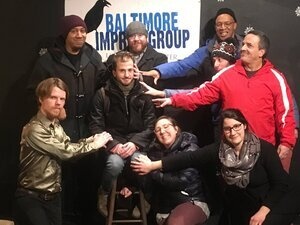 This underground illegal comedy battle pits two teams against each other in long-form improv Krav Maga where ANY MEANS NECESSARY will win over the audience, the refs, and ultimately the battle. It'll be brutally funny.

The returning champs will defend their crown against a challenger.

Parking: $3 at the lot across the street if you say you are there for the theater. Accessibility: Wheelchair ramp access.

We're a non-profit 501(c)(3) group in the heart of Baltimore City's Station North Arts & Entertainment District next to Sofi's Crepes.