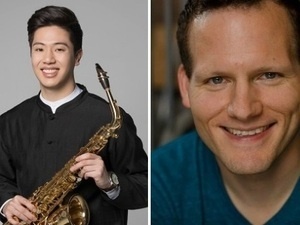 Saxophonist Tae Ho Hwang is dedicated to diversifying classical music by sharing eclectic programs to a wide range of audiences. He is praised for his “lovely sound” from former New York Times Critic and Columnist, Robert Sherman, and for his interpretation that “has a delicate sensitivity yet a solid power underneath.”

He recently earned a master’s degree in Saxophone Performance and Pedagogy at the Peabody Conservatory, where he studied with famed saxophonist Gary Louie. Taealso studied with Joseph Lulloff and Henning Schroder at the Brevard Music Festival, and distinguished saxophonists Claude Delangle, Arno Bornkamp, Vincent David, and Christian Wirth. He continues to learn music and is brainstorming his next projects with the help of his collaborators. In his free time outside of music, Tae enjoys reading and playing basketball and soccer.

Known as “a virtuosic soloist possessed of power, sensitivity, earthiness, and humor” (Whitney Smith, Indianapolis Star) with the “power to make an audience sit up and pay attention . . . thought-provoking for performers and listeners alike” (James Manheim, All Music Guide ), Michael Sheppard studied with the legendary Leon Fleisher at the Peabody Conservatory. He was selected by the American Pianists Association as a Classical Fellow, which designation led to the recording of his Harmonia Mundi CD of 2007. In 2019, another recording was released by Azica, a Cleveland-based label distributed worldwide by Naxos Records, as well as an experimental album of all improvisations.

He has performed solo recitals and concertos around the world. As a funny little matter of fact, he has given solo recitals in the hometowns of both Mahler (Jihlava, Czech Republic) and Elvis (Tupelo, Mississippi), and enjoys taking in the local culture wherever in the world he finds himself. Michael gives master classes, teaches regularly and plays with some of the top singers and instrumentalists around; he also coaches singers, instrumentalists, and conductors, and also conducts occasionally himself.

An improviser and composer since the single digits of age, he has worked closely with fellow composers John Corigliano, Christopher Theofanidis, Michael Hersch, Robert Sirota and the late Nicholas Maw, demonstrating a deep love of new music; his eclectic tastes also led him recently to musical-direct performances of Jason Robert Brown's Broadway show “The Last Five Years” as well as “Elegies for Angels, Punks, and Raging Queens” at the Brighton (U.K.) Fringe Fest, in which show he also made his stage acting debut.

Sheppard is a native of Philadelphia and resides in Baltimore, where he works at both the Peabody Conservatory and the Baltimore School for the Arts, sharing his love and understanding of music and the artistic process with future generations.

Streaming cost is $5
Donations are welcomed.
The link will be emailed to you after purchase
and will remain active thru Thurs, April 16, at 11:59 p.m.

Please do not share the link among your friends, rather encourage them to purchase the link for just $5. Tthe artists greatly need the support during this time of shuttered venues.