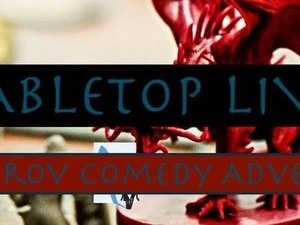 Join our Dungeon Master as he takes three brave adventurers on a quest through a magical world. Dungeons, dragons and many other dangers await the improvisers that dare play his perilous game. For fans of improv comedy, live action role-playing (LARP), neither, or both!

Baltimore Improv Group offers free comedy shows every night of the week. Please reserve so we know you're coming.

Trains: The theater is located two blocks north of Penn Station, on the same side of the street! Just walk on up. This is easy day trip from Washington, DC or Philadelphia, Pennsylvania.

Planes: If you don’t want to do cab / Uber / Lyft from BWI Airport, you can take the MARC train to Penn Station (there’s a quick shuttle from the airport to the train station), OR you can take the Light Rail. There are two lines - one that goes directly to Penn Station, and one that stops at “University of Baltimore/Mt. Royal” which is two blocks away.

Automobiles: Parking is available on the street (mind the hours on the meters), or in the garage directly across the street from The Charles Theater. Mention that you’re with BIG, and you get a discount!

Public Transit: The theater is on the path of the MTA’s Silver and Green bus routes as well as that of the free but erratic Charm City Circulator. We’re a five-minute walk to two Light Rail stops. (Download the “Transit” app to help make things easier, if you’re doing public transit: https://transitapp.com

Dockless Vehicle Rentals: Dockless vehicles, including, include bicycles, e-bicycles, and e-scooters which are typically plentiful in our neighborhood.