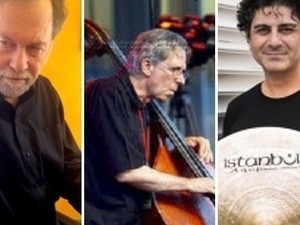 Richmond, VA pianist/composer Steve Kessler says he is an improviser first. The self taught pianist has led his own groups for years, and also performed with Joe Henderson, Donald Byrd, Woody Herman’s Thundering Herd and others.

Style Magazine music critic Peter McEllhiney writes, "If Steve Kessler is - to use the cliché - “the best kept secret in jazz”, it is by his design. Fame has not so much eluded pianist Steve Kessler as he has eluded it. Over the years, he resisted high profile offers from jazz legend Freddie Hubbard to Bruce Springsteen to Dave Matthews, to maintain a personal vision of the music he sought to play.

Kessler is a stunningly imaginative and engaging player. He thinks quickly, plays fluidly, and doesn’t sound like anyone else. A musician’s musician, seldom recorded, he channels his considerable talent almost exclusively into performance. At the height of a solo, Kessler rises on crouched tiptoe, bearing into the keyboard, fingers splashing out runs and clusters. His playing is bracing, articulate, unpredictable and totally individual. In originality, imagination, commitment and execution, there are few players anywhere who are his equal.

Bassist Paul Langosch began his studies on double bass in 1969 with Albert Webster and later continued private lessons with William Vaughn, both of the National Symphony. He began his college studies at Montgomery College in Rockville and later attended American University University of Miami in Coral Gables.

In 1985 Tony Bennett invited Paul to become a permanent member of his trio. His association with Mr. Bennett lasted over 20 years.

Emre Kartari is a Turkish jazz percussionist. Born into a family of musicians and artists, he moved to the U.S. when he was ten and began to study drums, which led to studying jazz percussion with T. Howard Curtis at Virginia Commonwealth University. He holds an M.A. in jazz performance and composition from New York University and received the Barney Josephson Award in 2003.

His first CD as a leader, Perpetual Anxiety, is released in Turkey under the Dogan Music label. Kartari has played and recorded with his own quartet Origin, featuring David Liebman, John D'earth and Howard Curtis. Emre also recorded with the trio Big Girl, featuring Darius Jones and Trevor Dunn from John Zorn-Fantomas. As an educator, he worked with the New York Pops-Mentors in Music program.

At the Hacettepe University in Ankara, Turkey, he formed the first jazz program approved by the state. He is currently a member of Ya?ar University in ?zmir, Turkey.