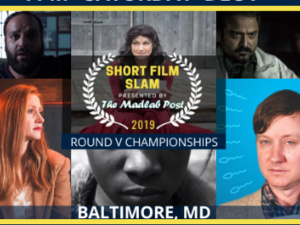 Four rounds. Nearly 50 films. It all comes down to the final dozen at this tournament style short film showcase presented by The Madlab Post! Come watch an international selection of short films and choose which one will be awarded the Championship title when the 2019 Short Film Slam: Round V screens at the Motor House in Baltimore's Station North Arts District.

Don't miss out on these films as well as several other shorts exploring multifaceted aspects of the human experience such as an auto mechanic’s strange and unexpected ride to fatherhood; Asian identity as it relates to the intersections of Korean, Cambodian, Chinese and American cultures, and an actress coping with cancer through humor and optimism.

WATCH Films, MEET the Filmmakers and VOTE for your fave!