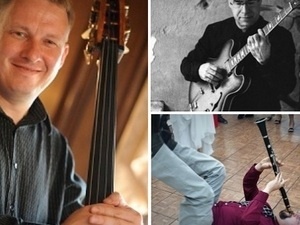 A varied and exciting program of jazz, klezmer, and everything in-between.

Seth Kibel is one of the Mid-Atlantic’s premier woodwind specialists, working with some of the best bands in klezmer, jazz, swing, and more.  Wowing audiences on clarinet, saxophone, and flute, Seth has made a name for himself in the Washington/Baltimore region, and beyond. He is the featured performer with The Kleztet, Bay Jazz Project, Music Pilgrim Trio, The Natty Beaux, and more.  Winner of 28 Washington Area Music Awards (Wammies), including “Best World Music Instrumentalist” (2003-11) and “Best Jazz Instrumentalist” (2005, 2007-8, 2011-14). His most recent recording, "When You're Smiling," was released in 2018 on the Azalea City Recordings record label.  His song "New Waltz" was the Grand Prize winner of the 2016 Mid-Atlantic Song Contest (MASC), sponsored by the Songwriters' Association of Washington (SAW). www.sethkibel.com

Michael Raitzyk is a long time Baltimore guitarist who plays Jazz, Blues, Klezmer, Folk, and Contra Dance music. When he's not out playing every week, he teaches at Howard and Frederick Community College in the music department. He has 5 CD's as a lead musician. His latest is entitled, Everything Must Change.  https://www.mraitzyk.com/

Bob Abbott is a freelance bass player and arranger in the Mid Atlantic region. His performance experiences range from local events to being a clinician and featured performer at international music festivals in Croatia.  Bob is an endorsed artist for JanAid Basses, GuitarStrap.It, Acme Bass Speakers Nitewalker Preamps, & Guardian Pro Cables.  http://www.bobabbottmusic.com/

Streaming cost is $5
Donations are welcomed.
The link will be emailed to you approx. 15 minutes prior to the show
and will remain active through June 22