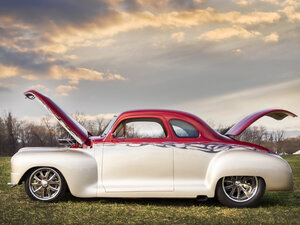 The 8th Annual Romancing the Chrome, the largest car show of its kind in Northeastern Maryland featuring more than 250 classic cars and hotrods, takes place Saturday, April 13, from 10 a.m. to 4 p.m. at Jarrett’s Field, 3719 Norrisville Road in Jarrettsville, across from the Jarrettsville Library. Romancing the Chrome is family friendly, and admission is free of charge.

Car show participants will compete for the $500 Best in Show prize plus a Best in Class (first prize) of $75. Awards also will be presented for second and third place in each class.

A new addition in 2019 is the People's Choice Award. Romancing the Chrome attendees will vote for their favorite entry, and the winner will receive a trophy.

Pre-registration (through April 8) costs $15 for those vehicles being considered for the People's Choice Award and $20 for those entering the judged competition. Registration the day of the show, April 13 from 7 to 10 a.m., costs $20 for vehicles entering the People's Choice Award category and $25 for the judged competition. Those interested in entering their cars should visit romancingthechrome.org or call Nina Depkin at 410-273-5600 x6514 or email depkinn@hcplonline.org.

The Fourth Annual Hero's Award, in memory of Senior Deputy Patrick Dailey and Deputy First Class Mark Logsdon, will also be presented at the show.

In case of inclement weather, Romancing the Chrome will be held Saturday, April 20.

For more information about Romancing the Chrome, visit romancingthechrome.org.