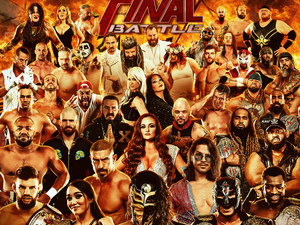 Final Battle has been ROH’s biggest annual event since the company’s inception in 2002. The star-studded extravaganza has produced a multitude of memorable moments, including Match of the Year winners and five ROH World Title changes.

Scores will be settled, championships will be decided, and the best wrestlers on the planet will pull out all the stops at Final Battle.

Tickets are on sale now at Ticketmaster.com, Final Battle is also available on pay-per-view and streaming live for HonorClub.

Keep it locked into ROHWrestling.com and ROH’s social media channels for ticket on-sale information so that you can join us in Baltimore to experience Final Battle and The Best Wrestling on the Planet live!

Don't miss your opportunity to see Ring Of Honor live and in person, purchase your tickets to Final Battle here: https://www.ticketmaster.com/ring-of-honor-wrestling-final-battle-baltimore-maryland-12-11-2021/event/15005B5295BD342A