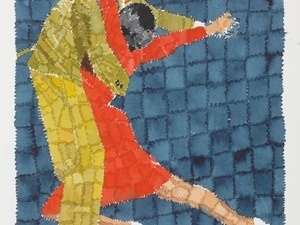 Richard Yarde: Beyond the Savoy

Richard Yarde’s virtuosic watercolors transformed the medium with large-scale colorful paintings often composed on multiple attached sheets of paper and executed without preliminary drawing. Equally inspired by historical Black photographers, European post-Impressionists and by a keen political purpose, Yarde (1939–2011, Massachusetts) drew acclaim early in his career for his masterful portraits of Black leaders—athletes, swing-era dancers, blues and jazz musicians—as well as individuals he knew growing up in the multicultural Boston neighborhood of Roxbury. The success of these early works led Yarde to create an ambitious three-dimensional installation that revived the memory of New York’s famous Savoy Ballroom. It was presented at the BMA in 1983 and later hailed by The New York Times as “the most spectacular installation of the year” when it opened at the Studio Museum in Harlem. Nearly 40 years later, Richard Yarde explores the development of Yarde’s watercolors over the course of three decades. Approximately 30 works include representations of Lead Belly, Paul Robeson, Sojourner Truth, and Malcolm X as well as self-portraits and poignant scenes of Black life.