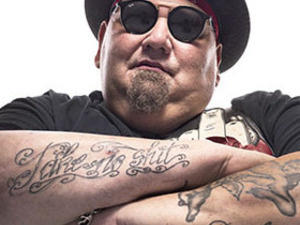 Popa Chubby believes that music should be dangerous. Born Ted Horowitz, this blazing blues guitarist got his start playing punk in New York City over 25 years ago. He cut his teeth on the CBGB stage playing guitar for the outlandish, horror movie-inspired act Screaming Mad George. He was later recruited to play bass with punk icon Richard Hell in The Voidoids. As Popa Chubby, Horowitz draws from that punk ferocity while paying tribute to the blues idols that first inspired him. The result is, as Horowitz describes it, “the Stooges meets Buddy Guy, Motörhead meets Muddy Waters, and Jimi Hendrix meets Robert Johnson.”