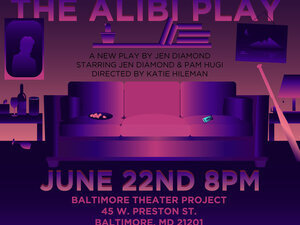 OLGA Presents A Stand-Up Show or The Alibi Play

Jen and Pam – aka indie comedy duo OLGA – are super psyched to perform for you a brand new night of stand up comedy!!!

Well, they would be psyched – except Jen’s boyfriend just broke up with her in a frozen yogurt shop. And Pam is unemployed and unable to buy a Bitcoin. And something really, really bad happened just a few hours ago and it might just change both of their lives forever.

Half stand up, half theatre, this new play from the minds of OLGA comedy kaleidoscopes reality, fantasy, and friendship to figure out what it means to be a truly Good Person.

This performance is supported in part by the Maryland State Arts Council (msac.org).

About the performers: OLGA is a Baltimore-based indie comedy duo comprised of Jen Diamond and Pam Hugi. Formed in 2014, OLGA performs long-form improv, original sketches, and duo-stand up. OLGA has performed and taught workshops up and down the East Coast. They both love their moms a lot. www.olgacomedy.com