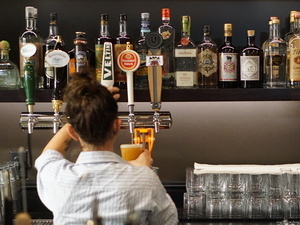 On Saturday, October 3rd, German bar and restaurant Rathskeller will be bringing the German celebration of Oktoberfest to their beautiful patio on the historic main street of Elkridge. Opened in 2019, Rathskeller had become a popular German-inspired spot for the Elkridge and surrounding communities when it was forced to close in March for two months as they figured out how they were going to operate during the pandemic.

In June 2020, they re-launched Rathskeller with a major focus on the popular German street food: schnitzel. Since the re-launch, they’ve added wursts made by local German meat market legend, Binkert's (Rosedale, MD), along with other partnerships such as a Black Forest Ice Cream Sandwich for dessert by Scoop & Paddle (Clarksville, MD), and lemon lavender edelweiss liquid hand soap for their bathrooms from Buttercup Soaperie (Old Ellicott City, MD). Now that they have reconfigured their concept, Rathskeller is excited to provide a further sense of community through their Oktoberfest festival this Fall.

Featuring Frank Plumer and Das German Band, Rathskeller’s Oktoberfest will take place outdoors, rain or shine, on the restaurant’s beautiful patio and parking lot to allow a fun, but socially distant event. The event will be ticketed with a max capacity of 50 guests. Tickets will be $65 inclusive of tax and gratuity and will include beer, wine, liquor tastings, unlimited wursts, german pretzels, and potato cakes. “Food Only” tickets will also be available for $50. Guests will also receive two drink tickets upon entering to try tastings of Rathskeller’s Elkridge Lemon Stick and Jager Old Fashioned.

Along with bringing cheer to the community, the Oktoberfest celebration will be in partnership with Friends of Patapsco Valley, who supports the park by promoting stewardship through programming, sustainable recreation, and the preservation and restoration of its natural resources. $10 of every ticket will be donated to Friends of Patapsco Valley towards this mission and guests will be entered into a door raffle.