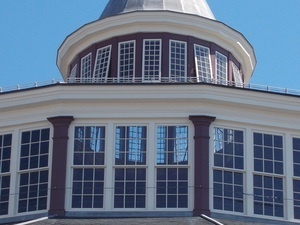 During February’s Black History Month, the B&O Railroad Museum will present a new temporary exhibit, entitled Best In Service, a rare art exhibit pf paintings and photographs from the B&O archives not previously displayed honoring the service of African Americans and their contributions to the B&O Railroad. Best In Service features original paintings by American illustrators Dan Content and Roy Federick Spreter. Commissioned by the B&O Railroad in the early 1930s, these artists painted full page, oil on canvas railroad scenes of service primarily used for creating advertisements for publications such as the “Saturday Evening Post” and the “B&O Employee Magazine”.

Best in Service will only be on exhibit at the B&O Railroad Museum for the months of February and March. First to Fight: Railroaders of WWI featuring a scale model of the 1917 Battle of Cambrai will be exhibited May and June. August and September conclude with Protecting the Line: The First Railroad Police Unit in the Nation that also provides a peek into the Museum’s future with the opening of First Mile Stables, a new home for Baltimore City’s Mounted Police Unit.