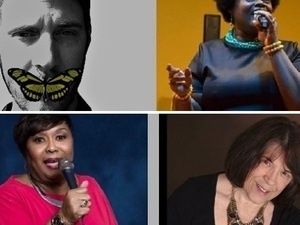 An Evening of Song

Matthew George is a multi-instrumentalist who grew up in many different states and came to Baltimore by way of Spain, where he lived for six years while studying the flamenco guitar with Luis Dávila Oria and Manuel Montero.  Prior to that, he had been lead cellist for the Oakland Civic Orchestra under the direction of Martha Stoddard and was earlier co-principal cellist for the Connecticut College Symphony under the direction of Michael Adelson, now serving as staff conductor for the New York Philharmonic.  Growing up, he studied classical piano at Pacific Lutheran University with Professor Richard Farner and bass with Hawaiian Symphony Orchestra bassist Vladimir Zybiriovski.  Since moving to Baltimore, Matt has been studying under the guidance of local legends such as Jeff Reed, Aaron Hill, and Charlie Higgs; accompanying various musicals ensembles and theatrical productions; directing a gospel choir from the Hammond organ on Sundays; and rocking the 'boards with the Bachelor Boys wedding band on summer nights.

Shalanda Hansboro is a powerful and inspiring performing artist whose musical specialties range from Gospel to Opera. She began at the Baltimore School of Arts and went on to study at Julliard and the Curtis Institute of Music. She tours Baltimore as music minister to a variety of churches, as well as singing R&B and jazz at local concert venues.

Audrey Haskins is a Morgan State University graduate and a career educator. A connoisseur of both the music and its history, she is currently touring around Baltimore and bringing joy to the hearts of audiences through her great passion of jazz and blues standards from the 1930's-60's.

Liz Fixsen is a dedicated jazz artist and appreciator.  Both a vocalist and pianist, she leads jazz consortia in local venues around the city.  She is a biographer and writer for the Baltimore Jazz Alliance newsletter and takes a personal interest in the vivacity of the music scene in Baltimore.  A multi-linguist, she specializes in the sultry melodies of Brazilian samba and latin jazz.