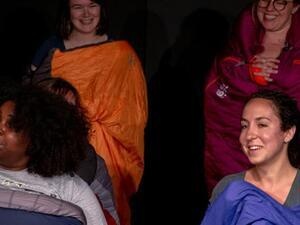 The BIG Theater opened in October 2017 in Station North Arts & Entertainment District in the core of Baltimore City. The theater offers 3,000 square feet of space for live comedy shows; classes and workshops for adults, kids and teens; and a podcast studio.

As a nonprofit, BIG serves as one of the largest arts education venues in the Baltimore area outside of a university.

Learn improvisational comedy which we teach to adults and kids and everyone in-between. Kids and teens learn from us through the Young Audiences/Arts For Learning Maryland in the greater Baltimore area and throughout the state of Maryland.

BIG provided high-quality instruction to more than 500 adults, teens, and kids in the 2017 calendar year. In 2017, BIG entertained more than 6,000 patrons with 200+ improv comedy shows.

Baltimore has a home for hilarious, never-to-be-seen-again comedy. A place where you can be more than entertained. You can also become a part of a community. ​A place where any night of the week you can catch a show, play board and video games, sip a stimulating beverage, and most of all, LAUGH! That's what Baltimore Improv Group (BIG) gives to our city. Won't you help us create it?