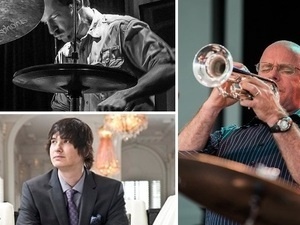 This is an encore of their very popular performance on June 3rd!

Drummer, recording artist, educator, Michael Kuhl hails from the musically diverse city of Baltimore. Kuhl studied and performed in numerous genres, making him a first call drummer for any situation. A graduate of Towson University, Kuhl has performed locally and throughout the globe alongside jazz greats Dave Liebman, Tony Malaby, Michael Formaneck, Dave Ballou, Ellery Eskelin and Claudio Roditi. Outside of jazz, Kuhl has shared the stage with many international acts such as Beach House, Arboretum, Cigarettes After Sex, Tom Tom Club, and The Ravonnettes. As a leader, Kuhl performed with his trio every Tuesday night at Bertha’s in Fells Point, before the pandemic. Alongside of his musical career, Mike is an accomplished martial artist of Bagua Kung Fu, in which he says the two arts go hand in hand.

John Lee is a composer and guitarist residing in Washington D.C. He has devoted his life to exploring the art of music. Lee earned a B.F.A. in Jazz Performance from The New School University, Mannes Jazz and Contemporary Music Program He has toured and performed with prominent figures; he can be heard playing guitar on over 15 recorded albums and led the release of four of his own: Currently, Lee teaches for MusiCorps, a music rehabilitation program that pairs musicians with wounded service members to help them recover their lives through musical study at Walter Reed National Military Medical Center. Lee’s philosophy is ,“You are your own best teacher.”  He is excited and enthusiastic about joining the Jazz and Commercial Division at Towson University.

Ballou is a Professor of Music at Towson University and Division Leader of the Jazz and Commercial Music Division. He is the founding director of the Bill and Helen Murray Jazz Residency. .

Streaming cost is $5
Donations are welcomed.
The link will be emailed to you 15 minutes before the show
and will remain active through August 4