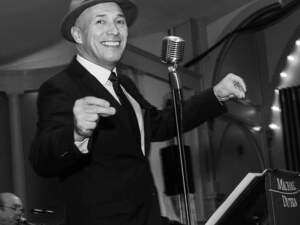 Let Michael Dutra and his 9 piece band fly you to the moon with the sounds of Sinatra.

Michael has been hailed as one of the finest interpreters of the Sinatra sound in the world, as said by Boston Globe Columnist Wesley Morris “his sound is velour to Sinatra’s velvet, you really can’t tell the difference”.   Ron Della Chiesa of WPLM Boston Radio and Sinatra Guru said “Michael literally channels Sinatra”.

Hors d'oeuvres served before the show.