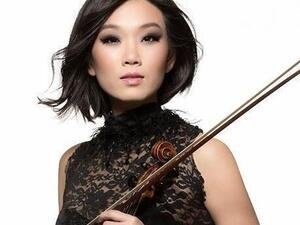 Maureen Choi Quartet (Spanish-Folk Jazz) is a diverse group of classical, flamenco, and jazz musicians from the US, Spain and Cuba.

Maureen Choi returns to the USA to present her new album, “THEIA”.

Now residing in Spain, this Korean-American violinist is sparkling a revolution in the improvised music scene in Spain. Her band “Maureen Choi Quartet” is creating a sound that they like to call, “Spanish Chamber Jazz”.

After winning several international violin competitions, starting at age 5, she has performed as a soloist across Australia, Asia, Europe and North America. A graduate from Michigan State University and Berklee College of Music, she has performed with artists like Rodney Whitaker, Johnny O’Neal, Larry Harlow, Josh Groban, Kanye West, Tran-Siberian Orchestra, or Javier Colina and recorded for many artists and movie soundtracks. She has been a faculty member at Berklee College of Music and presently she teaches at Centro Superior Música Creativa in Madrid.

She recorded her first album as a leader “Maureen Choi Quartet” with jazz greats from the Detroit scene and after moving to Spain and forming her own quartet, she recorded “Ida y Vuelta” featuring her original compositions and arrangements.

Her band, the Maureen Choi Quartet, won 1st prize in the International Jazz Competition in Talavera and since then, played more than 500 concerts in clubs and festivals all over Spain and the United States, making appearances on Radio 3 RNE and La Hora Cultural TVE (Spanish National Radio and TV).  Maureen Choi Quartet is continuously selling out tickets in places like Café Central (Voted one of the “World’s Top 100 Jazz Clubs in the World” by Downbeat Magazine) and has performed in the Madrid Jazz Festival, Jazz Festival in Guggenheim, Jazz Festival Yecla, Jazz Festival Teruel, Atlantic Sons Festival, South by Southwest, Festival de Jazz San Javier, CLAZZ and many more.

Choi is currently on tour with her new album “THEIA”, and is scheduled to appear in festivals in Beijing, Shanghai, Hong Kong, Taichung, Seoul, Jarasum, Tokyo, and Guangzhou later this year.