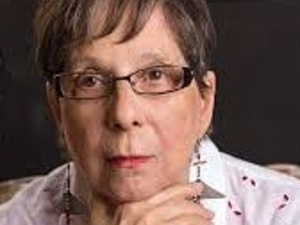 Poetry and song lyrics have a lot in common, but they also have crucial differences. To explore that complicated relationship, Maryland's Poet Laureate Grace Cavalieri, the Roots Café’s Geoffrey Himes will read their poetry, play some songs and talk about verse in all its guises.

GRACE CAVALIERI:
Grace Cavalieri has been the host of public radio’s nationally syndicated “The Poet and the Poem” for 39 years now. She is a noted poet and playwright herself with many published books and produced plays. Her newest book is “Other Voices, Other Lives: A Grace Cavalieri Collection,” a selection of poems, plays, and interviews drawn from over 40 years of work.  She has received the George Garrett Award from AWP for Service to literature, a Pen Fiction Award, plus CPB’s Silver Medal as well as the Allen Ginsberg, Paterson, Bordighera, and Columbia Poetry Awards. “In the wake of death or abandonment,” the Baltimore City Paper wrote about her poetry, “we find ourselves moving involuntarily between the realms of the past, present, future and imaginary. What Cavalieri proves especially good at is capturing the willy-nilly fluidity of those transitions.”  http://www.gracecavalieri.com/

Though he is best known as a music critic for the Washington Post, Baltimore City Paper, Nashville Scene, Jazz Times, No Depression, Paste and others, Geoffrey Himes is also a longtime singer-songwriter who has co-written songs with Fred Koller, Walter Egan, Si Kahn, Sonia Rutstein, Billy Kemp, Stephen Wade, Jim Patton, Ken Kolodner, Andrew Grimm, Bob Kannenberg and others. Himes, a singer-pianist, performs in a duo with Love Riot violinist Willem Elsevier. This month Himes will premiere a new song, “The Coffin and the Seed."  http://www.facebook.com/RootsCafeBaltimore

Willem Elsevier is a trained violinist who has found success in both the classical and jazz worlds. He is best known, however, for his role in Love Riot, the Baltimore rock band that recorded with producer Eric Ambel and toured widely. Elsevier’s sophisticated solos helped the band beat out 2,500 other bands from around the globe to win the Yamaha Music Quest competition  in Japan in 1994. Elsevier has also recorded with such acts as Billy Kemp and Milkshake. Since 2012, he has been performing and songwriter in a duo with Geoffrey Himes.