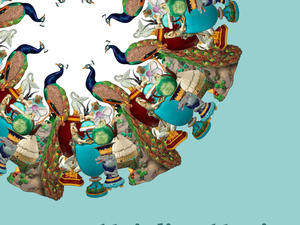 The Walters Art Museum transports visitors back to the Victorian era with Majolica Mania, an exhibition that highlights the beauty and inventiveness of a once wildly popular ceramic.

Taking over the entirety of 1 West Mount Vernon Place, also known as Hackerman House,  Majolica Mania features immersive installations on each floor, including a recreation of a Victorian parlor complete with faux plants and foods. This exhibition restores majolica, which fell out of favor in the early to mid-20th century, to the history of design.

Featuring 350 works that highlight the vibrant color of the ceramic’s lead-based glazes and stunning inventiveness, Majolica Mania explores themes including the natural world, foods and fashions, class, labor, immigration, and the human cost of majolica’s production. Majolica gets its name from the tin-glazed maiolica of the Italian Renaissance and was an answer to the question of what good design should look like in an age of industrial manufacturing.

Majolica was introduced at the Great Exhibition of 1851 and quickly became ubiquitous in Victorian England and America, with works appearing in museum displays and royal palaces as well as in the homes of average citizens. As majolica retailed at a cheaper price than porcelain, it was available to all classes of society and, in Victorian homes, was commonly found in the conservatory or dining room, in the form of tureens and servers, jardinières, teapots, garden seats, plates, and decorative statues.

British potters and craftspeople immigrating to North America contributed their knowledge and skill to the growing American pottery industry, leading to the large-scale production of majolica. Baltimore was a center of majolica production in the U.S. and was home to majolica makers Chesapeake Pottery and Edwin Bennett Pottery.

When the lead glazes needed to achieve majolica’s shine and vibrancy were outlawed as poisonous to workers, its production all but ceased. To honor the many in the majolica industry who became ill or died as a result of working with the toxic glazes, Majolica Mania includes a ceramic memorial by contemporary artist Walter McConnell commissioned by the Walters and Bard Graduate Center. The exhibition also includes stories of the workers, with pictures of the factories and towns where majolica was made.

Co-organized by the Walters and Bard Graduate Center, Majolica Mania features works from such major British manufacturers and designers as Minton, Wedgwood, and George Jones, as well as leading American potteries including Griffen, Smith & Hill Company of Pennsylvania. Loans from museums in Great Britain, including the Royal Collection, and Victoria and Albert Museum, as well as works from the Maryland Historical Society and Philadelphia Museum of Art, will be on view along with works from private collections, many of which have never before been publicly displayed.

Accompanying the exhibition is a fully illustrated, three-volume catalogue published by Bard Graduate Center and the Walters, with essays examining the design, production, and dissemination of majolica worldwide. Another publication, Majolica Mania: Highlights celebrates the artistry and whimsy of this ceramic ware, providing a historical overview illustrated with examples of both functional domestic objects and the monumental pieces made for display at the world’s fairs of the second half of the nineteenth century.