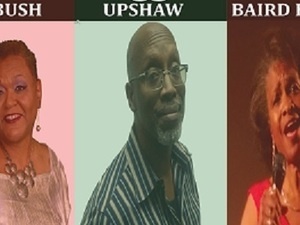 Ambuscade would like to invite you on another experience through the music of Jazz!  Sit back and enjoy a journey of life through the voices of three powerful vocalists, Marcia Baird Burris, Reggie Upshaw and Iva Jean Ambush. A la Dinah Washington, Marcia's fiery and gritty voice commands the stage as she weaves the stories of Billie Holiday and others.  Reggie epitomizes the dimensions of a true tenor voice with highs and lows.  He provokes you through Robert Mccray but inspires you through Curtis Mayfield and Marvin Gaye.  Then there is Iva Jean who is a true contralto. She can be totally unsentimental on one hand singing a Carmen McRae song, but can put a gripping hold on the audience with a Phyllis Hyman tune about the subject of love lost.

Join this stellar group along with their phenomenal rhythm section -- Pete Frassrand on piano, David Marsh on bass and Aaron Walker on drums.

Iva Ambush is a scat singing Jazz vocalist from Frederick, MD. Known as the Scat Lady, she decided to pursue a professional singing career more than 20 years ago when she returned to her birthplace. She steered clear of jazz as long as she could but having a family full of Jazz musicians, such as, trumpeter Lester Bowie, pianists Allen Ambush, Byron Bowie, guitarist Jonathan Townes, bassist Scott Ambush and band leaders Joseph Bowie (Defunkt) and members of the Bartonsville Cornet Band the clarion call was heard. Iva completed an "Emerging Artists Workshop" with Ronnie Wells at the Elliston Studio for Jazz Studies and private lessons with bebop legend, Sheila Jordan in the early 2000s. Intense master classes with Sheila Jordan, Dr. Horace Boyer, and Jay Clayton combined with rehearsal allowed Iva to grow immensely. Some of her other instructors include Dr. Frederick Tillis, Professor Charles Ellison, and the late Dr. Billy Taylor and Dr. Bro. Yusef Lateef.

Pete Frassrand  is grateful to have had the opportunity to learn from area players like Robert Redd, Charles Covington, and Tim Murphy. In 2000, he received a music education degree from Towson University and now shares jazz with young people as a music teacher. Since 2011 he has served as the pianist for the Greater U Street Jazz Collective, which has made appearances at events such as the DC Jazz Festival, the National Cherry Blossom Festival, the Mid-Atlantic Jazz Festival, and the Congressional Black Caucus.

David W. Marsh III is a graduate of the Duke Ellington School for the Performing Arts in Washington, DC.  He taught acoustic bass, electric bass and electric guitar and was the bassist in the Faculty Jazz Quintet at the George Washington University in Washington, DC for 14
Years.