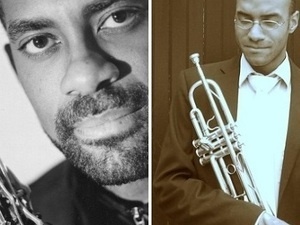 Leo Maxey is a Baltimore area jazz trumpeter. Reared in Augusta, GA, he began his musical studies under the tutelage of his father Leonard Maxey, Sr. and Darian Washington and was sharpened by the likes of local greats John Bradley, Michael Katterjohn, and Todd Jenkins.  As well as leading his own small groups he holds tenure with the BCJO and has performed with artists including the David Murray Baltimore Big Band, Todd Marcus Jazz Orchestra, the Whitt Williams Big Band, The Four Tops, The Impressions, the Mississippi Symphony Orchestra, Tito Rojas, and others. He has studied with Alex Norris, Gary Thomas, Michael Formanek, Tim Murphy, Paul Bollenback, Blake Meister, Russell Thomas, Robert Blaine, and Darcie Bishop.  He attended Brevard College, Jackson State University, and is a graduate of the Johns Hopkins Peabody Institute.

Hailed by JazzTimes as one of the most “original saxophone voices” of his generation, Gary Thomas has secured a central place in jazz history. A saxophonist, flutist, composer and educator, Thomas is one of the few true pioneers of our time. His contributions place him in a class of wholly individual artists who have simultaneously set the technical standard for and reinvented the language of their art. His resume evidences this, as he has worked extensively with the top names in the business.

Recent highlights include a two-year tenure with John McLaughlin, followed by several years with Herbie Hancock. His presence has even come to transcend genre, working with performers as diverse as Top 40 rap artists (including extended solos on rapper Q-Tip’s The Abstract) to top orchestras, and much in between.

Renowned as a first-call sideman, Thomas has etched out an equally compelling career as a bandleader, with eleven albums under his auspices. Two of these, By Any Means Necessary and While the Gate is Open, were named best recordings of the 1990’s by Downbeat magazine.

As an educator, Thomas forge new ground by founding the Peabody Conservatory Jazz Studies program in 2001. He became the first African-American department head in the school’s history. Later, he set a further precedent, becoming the first African-American endowed professor at the institute, as the Richard and Elizabeth Case Director of Jazz Studies. Thomas was formally recognized with the Johns Hopkins University Excellence in Teaching Award in 2012. He has taught extensively throughout the world, presenting masterclasses and lectures.

Born and raised in the Cherry Hill section of Baltimore City, Thomas’ rise to prominence as an international jazz icon stands as a triumph in the face of adversity. Graduating from Frederick Douglass High School, he attended one year of college at Howard University in Washington D.C., on a full scholarship, until further financial constraints halted his return. Practicing the saxophone eight hours each day (while working a full-time job), Thomas got his break with Jack DeJohnette’s Special Edition, alongside fellow saxophonist Greg Osby, followed by a spot as saxophonist with Miles Davis.

One of the few jazz masters never to migrate to New York City, Thomas attributes his unique sound and style partly to this decision. Thomas has been a competitive powerlifter, and enjoys studying new languages, to which he draws a parallel to jazz and improvisation. He resides in Baltimore City.