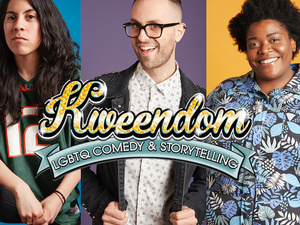 One of New York City's most beloved comedy shows, Kweendom, is coming to Baltimore! Featuring a diverse lineup of all LGBQT performers, every night is Pride at Kweendom (with none of the corporate nonsense).

Join us for a night of comedy, characters and storytelling that's sure to make Mike Pence uncomfortable. It's not just gay, it's GAAAAAYYYYY. Gay like The B-52s are gay. Gay like Hocus Pocus is gay. Gay like Pee-Wee’s Playhouse is gay. Come for the laughs, stay for the fresh faces in your Grindr grid.

20 percent of proceeds will be donated to The Pride Center of Maryland.