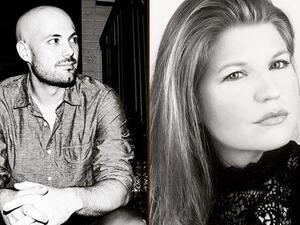 Vocalist Kristin Callahan and guitarist Evan Samuels will perform a program of jazz standards and Christmas songs, such as Winter Wonderland, The Christmas Song, and more!

Kristin has been singing and performing since she was 8 years old. She began studying jazz and piano in 2009 and has completed two jazz albums since then, “A New Love” and “One Magic Day.” Performing throughout the East Coast, Kristin has performed and recorded with several remarkable musicians such as Lee Pearson, Warren Wolf, Mike Pope, Allyn Johnson, Ameen Saleem, and many more. Kristin is currently composing her own original music and will debut one of her songs on her upcoming album. The album marks a different direction from previous albums, incorporating nontraditional rhythms and world instrumentation.

A native of Washington DC, Evan Samuels began studying and performing music at a young age. Upon picking up the guitar, he delved into traditional music, blues, slide guitar, and fusion, eventually leading him to the language of jazz. Evan studied jazz with Chuck D’Aloia and John Nazarenko at Skidmore College, and was privileged to interact and learn from great visiting artists like Joshua Redman, Aaron Goldberg, Eric Harland, and John Scofield, as well as participate in the Skidmore Jazz Institute. In 2007 Evan earned Bachelor’s of Art in music and history. Now based in DC, Evan is a regular on the local jazz scene and performs across the metropolitan area as a side-man as well as leading his own combos playing a mix of straight-ahead jazz and multi-genre influenced fusion.