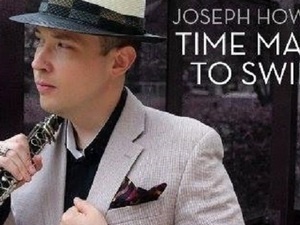 "...A brilliant virtuoso whose complete control over the clarinet and originality as both an improviser and a composer are very impressive... When Joseph Howell plays his clarinet, his improvising style is so distinctive that no other clarinetists come immediately to mind, not even the late Buddy DeFranco or Eddie Daniels…”- Scott Yanow, author of 11 books including The Jazz Singers, Trumpet Kings, Jazz On Film and Jazz On Record 1917-76

Doctor of Musical Arts and Veteran of US Navy Fleet Bands, Joseph David Howell was born in Porterville, California. After starting on the clarinet in elementary school, Joseph developed a strong interest in jazz music while in junior high, and added the saxophones and flute to his arsenal in high school. Howell completed his Bachelor’s degree at CSU Northridge, where he began his formal study of both jazz and classical music. While finishing his Master’s degree studies at San Diego State University, he appeared on Rick Helzer’s recording Face in the Mirror. At New England Conservatory in Boston, Joseph earned his Doctorate of Musical Arts. The culmination of his studies there was his first album, entirely comprised of original compositions, with classmates he knew at the conservatory: Jazz Clarinet Now!

After his schooling, Joseph worked as a music teacher and musician, first in San Diego and then in the Washington DC area. He married his long-time girlfriend, violist and music teacher Karen Hopkins. Most recently, he served a four-year enlistment in the US Navy, performing and deploying all over Asia with the Seventh Fleet Band. While abroad, he also performed as a solo artist and clinician in Japan, India, Singapore, and Hong Kong, wrote audio review articles for the International Clarinet Association, and released his newest CD, comprised of jazz standards: Time Made to Swing. Having returned to the DC area, he will again teach music and perform in the area.

Of his new CD, Time Made to Swing, Joseph told liner notes writer Scott Yanow: “This is a recording of highly trained modern-day musicians having a blast, spreading out and swinging on nice tunes. In the future I really hope to get to keep playing jazz of all kinds in this type of setting.” Joseph feels that his two albums, combined, give the most balanced look at all of the things he has typically done in small group jazz settings.

Musicians and writers unanimously use the words “virtuosic” and/or “virtuoso” when describing Howell’s clarinet and woodwind performances. As a jazz solo artist, he has shared the stage with names such as Paquito D’Rivera, Don Byron, Uri Caine, Rick Helzer, Marilyn Crispell, the Beantown Swing Orchestra, and many others. He has performed as a leader and soloist in many venues all over the US, as well as in India, Japan, Singapore, and Hong Kong! As a classical clarinet soloist, he has performed many of the standard classics, modernistic works by composer colleagues, and even a few of his own original works.

As a teacher, Joseph Howell has taught private music lessons for over fifteen years.