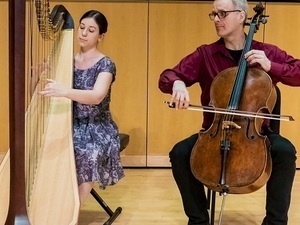 "I'm delighted to announce the completion of Beau Soir, a recording of pieces for cello and harp with Dariusz Skoraczewski, principal cello of the Baltimore Symphony Orchestra. It will shortly be available in both physical and digital versions. We will be holding a album release concert on Saturday, December 7 at 2 pm, An die Musik Live, 409 North Charles Street, Baltimore, MD." -- Jacqueline Pollauf

Jacqueline Pollauf, harpist, praised for playing with “transcendent ability” (The Sybaritic Singer) recently premiered a new work for harp and voice at Carnegie Hall in New York, New York. Past performances include the Eleventh World Harp Congress in Vancouver, Canada and the National Gallery of Art in Washington D.C. An active recitalist, Jacqueline always seeks to explore the versatility of the harp.

?A dedicated composer, Jacqueline’s works are available through Lyon and Healy Publications, Harp Column Music, and Oakway Studios. Recording credits include a forthcoming album with cellist Dariusz Skoraczewski, and Songs and Dreams for solo harp. Jacqueline has been honored with awards from the Maryland State Arts Council and Chamber Music America. In addition to being the director of the Baltimore Harp Camp, Jacqueline is on faculty of the Baltimore School for the Arts, and the University of Maryland, Baltimore County. She holds degrees from the Peabody Conservatory.

Baltimore Symphony Orchestra’s Principal Cellist Dariusz Skoraczewski has been described by Tim Smith of the Baltimore Sun as having “lush tone, expressive style and solid technique that have earned him admiration in a career that encompasses solo, chamber and orchestral music-making…” He has delighted audiences across the United States, Europe and Asia showcasing his artistry and virtuosic command of the cello. As a soloist he performed with numerous orchestras, including the National Philharmonic and the Baltimore Symphony Orchestra.