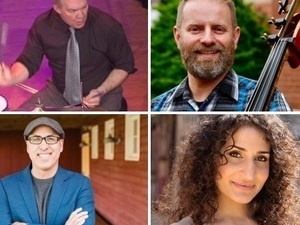 Frank Russo joyfully paints colorful soundscapes with his highly skilled, passionate, musical drumming. He's an in demand performer, recording artist and educator who currently resides in Maryland and teaches at Towson University. He is also an artist/educator for Bosphorus Cymbals, MD Drums and The Vic Firth Education Team. Raised in the NYC area, Frank was steeped in the rich musical heritage of the jazz legends at an early age and carriers on the legacy of a musical family.  Frank is a Summit Records Recording Artist whose recordings have gained national recognition and praise from Downbeat, Jazztimes and Modern Drummer. Frank is proud to exclusively perform on maple drums designed by Keith Larsen (Maryland Drum Company), Bosphorus Cymbals and Vic Firth Products.

Bassist, composer, performer, and teacher Miles Brown is a versatile musician who has earned bachelor and doctorate degrees from the Eastman School of Music in jazz performance studies and a master’s degree from the Mannes College of Music in classical bass performance. Miles has a passion for new music and is the bassist in the contemporary music ensemble Alarm Will Sound.  In 2019, Miles premiered a new work by William Thomas McKenney for Solo String Bass and Wind Ensemble, entitled Incino Arvum. He has performed this piece with the University of Missouri Wind Ensemble, and the University of Delaware Wind Ensemble. As a performer of new music, Miles has recorded on labels such as Nonesuch Records and Cantaloupe Records. He is an Assistant Professor of String Bass and Jazz at the University of Delaware.

Alan Blackman is a Baltimore based pianist and award-winning composer. He and his ensembles have performed at Blues Alley, the Kennedy Center, and many festivals and venues from San Francisco to New York. Recent performances have been with Donny McCaslin, Joe Locke, Ferenc Nemeth, Mike Pope, Warren Wolf, Tim Green, Alex Norris, and Sunna Gunnlaugs among others. He was selected to be part of the Betty Carter Jazz Ahead program at the Kennedy Center, The Banff Centre Residency program and has received grants from the Maryland State Arts Council in jazz composition, performance and world music as well as the Chamber Music of America’s prestigious New Jazz Works multi-year commission. Arrangements and performances of his music have been featured on NBC’s Parenthood, NPR’s Talk of the Nation, and JazzSet with Dee Dee Bridgewater, as well as Stephen King’s movie, 1408.

Italian-born, Baltimore-based jazz vocalist Irene Jalenti is a dynamic, soulful, and passionate performer and composer who delves deeply into the meaning of each song and brings drama and conviction to her performances with her naturally deep tone and a four-octave range. Adept at scat singing and able to sing in five different languages, she connects with and delights a range of audiences. Her sound has been compared to legends such as Nina Simone, Cassandra Wilson and Beth Carvalho. She has performed and recorded with the award-winning a cappella jazz ensemble Afro Blue, and with stars such as Esperanza Spalding, Patti Austin, the Count Basie Jazz Orchestra, and has shared the stage with Cassandra Wilson. Irene has also done background vocal work for Yolanda Adams, Common, Chance the Rapper, Kelly Clarkson and Marc Anthony. In 2019 Jalenti launched her first solo recording, New Island. In this album, she will present unique arrangements and originals.