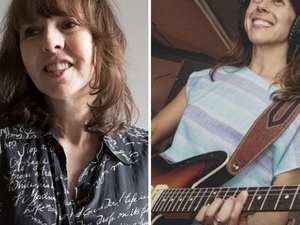 Amy Rigby was dubbed "one of America's greatest songwriters" by Nashville Scene.

The Old Guys has received ecstatic reviews in the US and UK. NPR/Fresh Air, Magnet magazine, Jersey Beat and Robert Christgau in Noisey/VICE have all called it one of the best albums of 2018.

From the New Yorker (Feb 2019): Raucous reflection is still Rigby’s strong suit, but, on a song like “From Philip Roth to R Zimmerman,” in which she seems to side with the late author over the Nobel-laureate musician, she’s clearly on to some new priorities.

“Her smart, thoughtful songwriting has been knocking the wind of listeners since she first came on the scene as a solo artist with her 1996 debut Diary Of A Mod Housewife.” No Depression

“...one of the most inventive songwriters of her generation.” Jersey Beat

Whatever you do, DON'T MISS THIS SHOW!!
The great Amy Rigby (one night only in this area) with the great Ms. Sara.
Greatness abounds!

Amy Rigby has made a life out of writing and singing about life. With bands Last Roundup and the Shams in eighties NYC East Village to her solo debut Diary Of A Mod Housewife out of nineties Williamsburg; through a songwriting career in 2000s Nashville and during the past decade with duo partner Wreckless Eric, she’s released records on visionary independent labels Rounder, Matador, Signature Sounds and reborn Stiff Records as well as her and Eric’s own Southern Domestic Recordings.  The Old Guys, her first solo album in a dozen years, measures the weight of heroes, home; family, friends and time. Philip Roth and Bob Dylan, CD/cassette players, touring, the wisdom of age and Walter White, groupies, Robert Altman, egg creams and mentors are paid tribute. Twelve songs written by Amy and recorded by Wreckless Eric in upstate New York, The Old Guys is the sound of a good girl grown up, never giving up.

Diary Of A Mod Housewife was a critical smash and commercial success. It was voted #8 album in the 1996 Village Voice Pazz & Jop Critics’ Poll and landed Amy on NPR’s Fresh Air with Terry Gross, noncommercial and college radio and in every major magazine and newspaper in the US.

Ms. Sara brings operatic-style vocal pyrotechnics to a soulful range of pop masterpieces.  She is a stunning talent - one-of-a-kind - not to be missed!