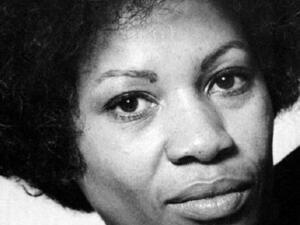 An evening of words and music honoring the “queen of American letters” (Ibram X. Kendi) on what would have been her 89th birthday.

The Evolution Contemporary Music Series has made Baltimore a destination for outstanding new music and musicians since 2005. Praised by Tim Smith of the Baltimore Sun for having “elevated and enriched Baltimore’s new music scene enormously,” and by the Baltimore City Paper as “superb…not the same-old, same-old,” the Evolution Series has presented or premiered works by over 100 composers, performed by acclaimed musicians from Baltimore and beyond. Featured guests have included Marin Alsop, music director of the Baltimore Symphony Orchestra; Pulitzer Prize-winning composers John Luther Adams, Caroline Shaw, and Julia Wolfe; and New Yorker music critic Alex Ross.

To live in Baltimore is to live in a perpetual state of surprise, and the marvelous and venturesome Evolution Series adds smart new music to the mix…for those of us who remember downtown New York in the 1970s, it is reassuring to find something very much like it happening in Baltimore now. – Tim Page, Washington Post

Tickets must be purchased at http://evolutionseries.org/