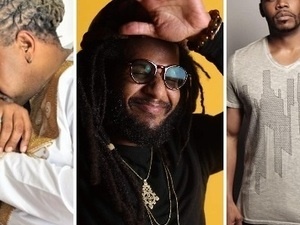 Three bandleaders, composers, educators and members of many rhythm sections (jazz, Latin, pop, blues, classical and more) unite for an evening of music and sound. These gentlemen pay tribute to the foundation of all music: Rhythm. An array of percussion instruments will be used to make a joyful noise and improvisation.

Joel Santiago is a recording and performing artist, producer, and songwriter/composer, among other artistic mediums. One of the dedications for which he is known is in Latin jazz and Afro/Cuban music, as well as many other diasporic expressions with an array of drums and a tapestry of percussion sounds. Joel studied with John Zidar before attending Duke Ellington School of the Arts to study with Francis Thompson. He has furthered his drum set studies with Alejandro Lucini, Frank Russo and Lester Wallace. He has furthered his education at Berklee School of Music, and he has studied percussion under Alfredo Mojica, Renee Ibáñez, Carlos Caro, and Héctor Barez.

Warren Wolf is a multi-instrumentalist from Baltimore. From the young age of three, Warren has been trained on the vibraphone/marimba, drums and piano. Under the guidance of his father Warren Wolf Sr., Warren has a deep background in all genres of music.

Warren attended the Peabody Preparatory studying classical music, and he attended Baltimore School for the Arts, studying with current BSO member John Locke. After graduating from Baltimore School for the Arts in 1997, Warren enrolled at Berklee College of Music in Boston. At Berklee, Warren studied with Caribbean Jazz Vibraphonist Dave Samuels for seven of eight semesters. One semester was spent with vibist Ed Saindon. Warren began to explore deeper into jazz.

A few years after graduating, Warren returned to Baltimore. He is currently the drummer of choice for Alto Saxophonist Tia Fuller, who tours with internationally renowned pop star Beyonce Knowles. Warren is also a member of the Donal Fox Group. He also tours and performs with Bobby Watson's "Live and Learn" Sextet, Karriem Riggins "Virtuoso Experience" and Christian McBride & "Inside Straight". Warren has several recordings as a leader., and he recently signed to the Mack Ave recording label.

Streaming cost is $10
Donations are welcomed.
The link will be revealed to you 15 minutes before the show
and will remain active through Feb. 18