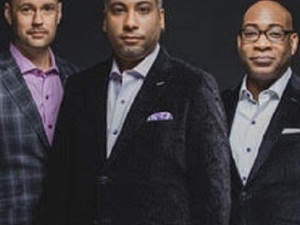 Comprised of pianist/vocalist Eric Byrd, bassist Bhagwan Khalsa, and drummer Alphonso Young, Jr., the band’s vision is to glorify the age of traditional jazz. These true ambassadors of jazz provide an energetic and modern approach to both old standards and original compositions

Pianist Eric Byrd was born in 1970 and raised outside Philadelphia, where he grew up listening to his fatherÆs swing and be-bop records. Since 1990 he has been a member of the Howard Burns Quartet. Byrd can be heard on Ron Kearns's live CD release, Thad Wilson Big BandÆs debut CD, and his own trio recordings.

The Eric Byrd Trio are premier Jazz musicians whose vision is to glorify the age of traditional jazz while providing an energetic and modern approach to standards and original compositions at the same time.

As true ambassadors of jazz, the Eric Byrd Trio have performed internationally for over 10 years. With several studio albums released, the EBT has enjoyed immense popularity and recognition from fans and government officials alike.

They are former Kennedy Center/United States State Department Jazz Ambassadors which provided them the opportunity to tour countries like Colombia, Bolivia, Chile, Peru, Honduras and Trinidad.

Their international touring includes concerts at the Montreux Switzerland Jazz Festival, multiple tours of South America, an appearance at a world music festival in Dubai in the United Arab Emirates, the country of Estonia, Italy and Scotland..