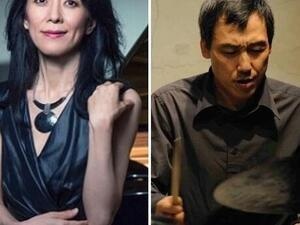 Since moving to the United States in 1995, Eri Yamamoto has established herself as one of jazz's most original and compelling pianists and composers. Jazz legend Herbie Hancock has said, “My hat’s off to her... already she’s found her own voice.”

During the past twenty years, Eri has shared her uniquely lyrical and evocative music with listeners in New York City, throughout the U.S., Canada, Europe, Japan, Jamaica, and Australia; with appearances in concerts, clubs, and major festivals.

She has a deeply empathetic rapport with her long-standing trio members bassist David Ambrosio and drummer Ikuo Takeuchi. Together they have recorded several albums, most recently “Life,” released in 2016. As the album title suggests, the music portrays a wide range of her experiences - from joyful to introspective, reflecting the vibrancy of New York  and exploring mysteries of nature and memory.  Downbeat magazine gave four stars to her previous release, “Firefly,” saying: “Her CD reaffirms Yamamoto’s standing as a contemporary pianist of the highest order. Her virtuosity never gets in the way of playing it straight from the heart.”

Eri has also been dedicated to the art of solo piano, moving audiences with her renditions of her own compositions and her spontaneous improvisations. Her most recent release, “Live in Benicàssim,” captures her 2017 solo piano concert in that picturesque Spanish town.  It is her first solo piano album, and her eleventh recording under her own name.

Eri was born in Osaka, Japan, and began playing classical piano at age three. She started composing when only eight years old, and studied voice, viola, and composition through her high school and college years. In 1995, she visited New York for the first time, and was so inspired by a performance by pianist Tommy Flanagan that she decided to move to New York to study jazz.. Later that year, she entered the New School University's prestigious jazz program, where she studied with Reggie Workman, Junior Mance, and LeeAnn Ledgerwood.

While in school, Eri started playing at the Avenue B Social Club in the East Village, and in 1998 her trio began an engagement at the historic Arthur’s Tavern in Greenwich Village.  Their run continues to this day, after twenty years and counting.

Eri has also been collaborating with such creative and celebrated musicians as William Parker, Daniel Carter, Hamid Drake, Federico Ughi, Yves Leveille and Paul McCandless. Eri has appeared on several William Parker recordings, and has performed in the U.S., Canada, Europe, Tunisia, and South Africa with his groups.

Ikuo Takeuchi, born in Japan, is a drummer, composer and has lived in New York City since 1988. He has been regularly performing in New York city and touring to Europe and Japan. Experience to play with many musicians such as Ron McClure, Cecil McBee, Richie Beirach, Eddie Henderson, George Gazone, Bruce Saunders, Jacob Sacks, the late Mr. Arnie Lawrence and so on. Takeuchi earned  BFA from the New School university for Jazz & contemporary music in NYC. He studied composition (especially 20C. music) with Dr. Henry Martin. Also studied drumming with Charli Persip, Michael Carvin, Andrew Cyrill, Kenwood Dennard, Joe Chambers and learned free style of jazz performing with Reggie Workman. He has been the regular drummer of Eri Yamamoto trio for twenty years.