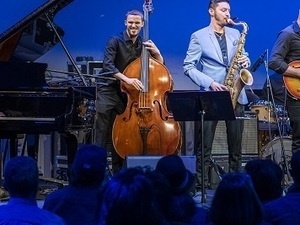 Elijah Jamal Balbed is one of the premiere Jazz Artists in Washington, DC. Winner of the 2020 DC Jazz Prix Competition, Elijah has also been named Best Tenor Saxophonist and Best New Jazz Musician by the Washington City Paper, and has been featured in various publications such as Capital Bop, Smithsonian Magazine, OnTap Magazine (now District Fray), and The Washington Post. In addition to Jazz, Elijah has a deep love for DC’s indigenous music known as Go-Go. Elijah performed with The Godfather of Go-Go Chuck Brown from 2011 until Mr. Brown’s passing in 2012. In 2014, Elijah founded The JoGo Project - a Jazz / Go-Go fusion band dedicated to promoting and preserving the legacy of DC’s unique art form.

Over the last decade or so, Elijah has established himself as an International Artist having performed in Japan, the United Kingdom, Jazz at Lincoln Center Doha (Qatar), and on the Capital Jazz Cruise which has taken Elijah all around the Caribbean Islands. In 2018 and 2019, Elijah led cultural diplomacy tours in Russia on behalf of the U.S. State Department and the U.S. Consulate in Yekaterinburg, sponsored by the Forum for Cultural Exchange (FCE). Most recently Elijah performed and did educational workshops at the 2021 Port-au-Prince International Jazz Festival (or #PAPJAZZ) in Port-au-Prince, Haiti with Trinidadian Steel Pan virtuoso Josanne Francis. When Elijah is not traveling, he dedicates his time at home to education and passing down the knowledge he's learned from performing, touring, and recording for a living.

For more information go to www.ejbjazz.com, or follow on socials @ejbjazz

Streaming cost is $10
Donations are welcomed.
The link will be revealed to you 15 minutes before the show
and will remain active through April 26