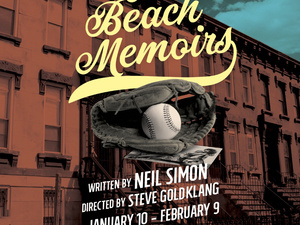 It’s 1937, and teenager Eugene Morris Jerome is obsessed with everything there is to know about  girls, the New York Yankees and becoming a writer, while his crowded family struggles through the Great Depression and the fear of a pending war in Europe. Simon’s deeply moving and hilariously entertaining comedy is a funny, nostalgic, joyful and heartrending portrayal of adolescence and the all-to-real adult problems that accelerate it----proving once again that great humor is timeless.

BRIGHTON BEACH MEMOIRS opens Friday, January 10 and runs through Sunday, February 9, with a special $10 Thursdays On Broadway performance on February 6 at 8:00 p.m.