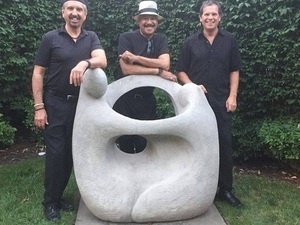 Led by Maryland-based guitarist Brian Kooken, the BK Trio also includes Greg Hatza (Hammond B3 organ) and Robert Shahid (drums). "Hit It” features a vast array of original compositions by Kooken, demonstrating mastery of blues, swing, jazz and funk. The three musicians have good chemistry, and they establish a solid groove on high-stepping pieces like “Hatza’s Groove,” and the soulful “It’s Monday and I’ve got the Blues.” I also dug the trio’s spirit conveyed by “In That Funk Again” and “Brazilian Blues.” It’s easy to be moved by the BK Trio’s tasty music, most likely because the compositions have solid foundations, and the musicians play with depth and commitment. With its clear focus on repertoire, phrasing, tone, timing and rhythm, this album is a perfect serving of palatable jazz to introduce the BK Trio.  (Joe Ross, Roots Music Report)

Brian Kooken is a jazz guitarist, composer, and instructor based in Baltimore, MD.  He has toured in Canada, Cuba, and France, and has performed at many venues and festivals in the Mid-Atlantic Region.  He has worked with Blues singers Marva Wright and E.C. Scott, Gospel artist William Becton, and Jazz organist Greg Hatza.
He has released three original albums:  Visions (2004),  A Minor Thing (2014), and Hit It (2020).

Greg Hatza is a jazz performer, composer and educator based in Baltimore, Maryland. A renowned Hammond B-3 organ player and keyboardist, he has performed internationally in India, Italy, Japan, and Russia. He has been recording since the 1960s primarily as the bandleader of Moon August and The Greg Hatza ORGANization. Greg’s formal education includes a Bachelor’s degree in Composition from the Peabody Conservatory and a Master’s from Towson State University, where he subsequently taught jazz, piano composition, improvisation and music theory for many years. He studied tabla and later sitar for more than ten years under Ustad Hamid Hossain.  In addition, Greg studied Chinese classical music on the erhu, a two-stringed Chinese fiddle, under Shanghai instructor, Liang Shan Tang. Greg released three Greg Hatza ORGANization CDs with Palmetto Records and his latest CD was self-released in 2017 on FLIP Records and is entitled Diggin’ Up My Roots.

Streaming cost is $5
Donations are welcomed.
The link will be emailed to you 15 minutes before the show
and will remain active through July 16