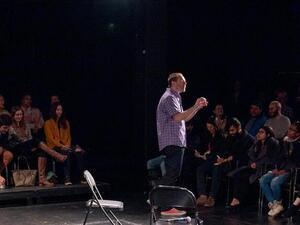 The Baltimore Improv Group (BIG) invites a new guest to be interviewed each week. We memorialize the life of our guest in a series of made up, totally unprepared comedy scenes celebrating them!

​Shows at The BIG Theater in the city's Station North Arts and Entertainment District include improv comedy (of course!), stand up, and sketch.