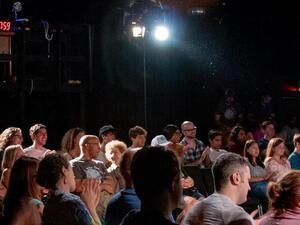 The Annual Baltimore Improv Festival returns with the best comedic talent on the east coast. Featuring comedy shows from Philadelphia, New York, Washington D.C., Baltimore, and beyond. Come see shows by some of the best in the business.

Whether you are a seasoned improv veteran, or it is literally your first time, we have a workshop for you. The Baltimore Improv Festival showcases a variety of local, regional, and nationally-known improv comedy groups in shows and workshops in Baltimore. Proceeds from comedy show ticket sales will fund BIG's artistic mission, compensate guest instructors, and will also help cover the cost of future Baltimore Improv Festival runs.

The Baltimore Improv Festival is produced by the Baltimore Improv Group (BIG), a non-profit 501(c)(3) group dedicated to advancing the art and appreciation of improvisational theater in the greater Baltimore community through a dynamic program of performance, instruction, and outreach.

We're a nonprofit theater in the heart of Baltimore's Station North Arts & Entertainment District next to Sofi's Crepes.