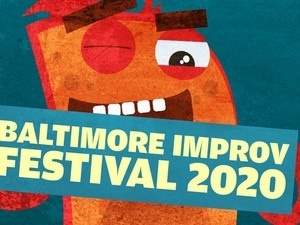 ​Experience top notch performers from all over North America including New York City, Philadelphia, Washington, DC, and – of course – Baltimore.

The Annual Baltimore Improv Festival (BIF) returns with the best comedy shows on the east coast and beyond.

Improv is all we do.
The Baltimore Improv Festival is an event produced by the Baltimore Improv Group, a non-profit 501(c)(3) group dedicated to advancing the art and appreciation of improvisational theater in the greater Baltimore community through a dynamic program of performance, instruction, and outreach.

As of 2019, our annual Baltimore Improv Festival brings  over 400 performers in 100+ comedy teams to the mid-atlantic region. In 2019,  visitors came from 25+ cities, 15 states, 2 countries, and performed in 45 shows over 7 days. We've bringing you one of the largest improv festivals on the east coast.

The Baltimore Improv Festival showcases a variety of local, regional, and nationally-known improv comedy groups in shows and workshops in Baltimore City.

BIG produces 100+ public and private comedy events  in and around Baltimore. BIG teaching classes and workshops for kids, teens and adults throughout the year.

Trains: Find the theater two blocks north of Penn Station, on the same side of the street! Just walk on up. Take an easy day trip from Washington, DC or Philadelphia.

Planes: If you don’t want to do cab / Uber / Lyft from BWI Airport, you can take the MARC train to Penn Station (there’s a quick shuttle from the airport to the train station)

Light Rail: There are two lines - one that goes directly to Penn Station, and one that stops at “University of Baltimore/Mt. Royal” which is two blocks away.
Automobiles: Park on the street (mind the hours on the meters). Park in the garage directly across the street from The Charles Theater. Mention that you’re with BIG, and you get a discount!

Dockless Vehicle Rentals: Dockless vehicles, including, include bicycles, e-bicycles, and e-scooters which are typically plentiful in our neighborhood. There is more information about them he