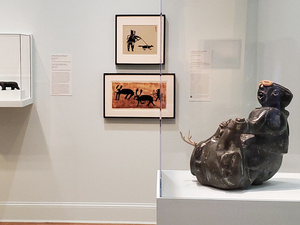 Explore the evolving role of Indigenous artists of the North American Arctic in this new exhibition of 20 rarely shown objects, many from the BMA’s collection.

Historically, the Indigenous artists who lived in the Arctic lands created ritualistic and utilitarian objects whose beauty was meant to honor the beings that sustained life in the harshest climates. As an influx of explorers, missionaries, whalers, and gold prospectors arrived in their lands in the late 19th and early 20th century, Indigenous artists’ roles shifted as they became vital economic forces that sustained their communities by producing art, including model kayaks and cribbage boards, made for sale to non-Native markets. By the mid-20th century, Canadian Inuit artists began carving animal sculptures and producing prints in collaborative workshops.

This event content is powered by Localist Event Calendar Software.