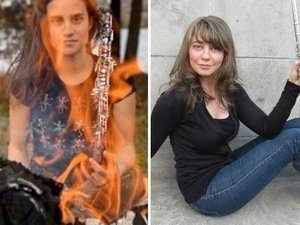 An Afternoon of Flute & Oboe with Mimi Stillman and Katherine Needleman

Flutist Mimi Stillman, acclaimed by The New York Times as “not only a consummate and charismatic performer, but also a scholar whose programs tend to activate ear, heart, and brain”, is renowned as soloist and chamber musician for her virtuosity, insightful interpretation, and adventurous programming. She has appeared with orchestras including The Philadelphia Orchestra, Indianapolis Chamber Orchestra, Orquesta Sinfónica de Yucatán, Bach Collegium Stuttgart, Chamber Orchestra of the Triangle, at venues including Carnegie Hall, The Kennedy Center, Philadelphia Chamber Music Society, La Jolla Chamber Music Society, Smithsonian American Art Museum, The Kimmel Center, National Sawdust, and Verbier Festival. Ms. Stillman is the founding Artistic Director of the popular Dolce Suono Ensemble, performing chamber music from Baroque to new music with 54 world premieres in 14 seasons. She is a prominent recording artist and author on music and history, and is highly regarded for expanding the repertoire through her commissions, arrangements, and compositions. A Yamaha Performing Artist and Clinician, strongly committed to excellence in education, she has taught masterclasses at institutions worldwide including the Eastman School of Music, Cornell University, Penn State, New England Conservatory, Indiana University, New York Flute Club, Michigan State University, the National Flute Association, and the universities of Texas, California, Virginia, Florida, and Arizona. She is the winner of numerous competitions and awards including Young Concert Artists International Auditions, Astral Artists Auditions, the Bärenreiter Prize, and the Earhart and Bradley Foundations.  A Spanish-speaker, Ms. Stillman won the Knight Foundation grant for her Música en tus Manos (Music in Your Hands) project to introduce chamber music to the Latino community. She received her Bachelor of Music from the Curtis Institute of Music and her MA in history from the University of Pennsylvania. She is on faculty at Temple University, Curtis Summerfest, and Music for All National Festival.

Katherine Needleman joined the Baltimore Symphony Orchestra as principal oboist in 2003, the same year she won first prize at the International Double Reed Society’s Gillet-Fox Competition. As soloist, she has appeared with many major orchestras, in addition to her frequent appearances with the BSO. She has performed as guest principal oboist with the New York Philharmonic, Saint Paul Chamber Orchestra, and the symphony orchestras of Atlanta, Boston, Chicago, New Zealand, and San Diego. A participant at the Marlboro Music Festival, she has also appeared on two tours with “Musicians from Marlboro.”

A Baltimore native, she attended the Baltimore School for the Arts, leaving early to attend the Curtis Institute of Music as a student of Richard Woodhams. She has been a member of the faculty at the Peabody Conservatory since 2005, and is currently on faculty at the Young Artist Summer Program at Curtis SummerFest.