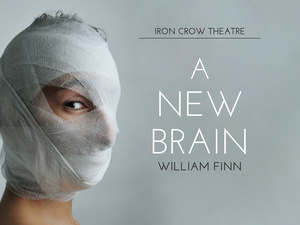 From the Tony Award-winning authors of Falsettos, William Finn and James Lapine, with vocal arrangements by Tony Award-winning Jason Robert Brown, A New Brain is an energetic, sardonic, and often comical musical about unforeseen life events reminding us of who we are, what we're made of, and who we hope to be. Gordon, a composer for a children's TV show that features a human frog named Mr. Bungee, dreams of quitting his ‘talent killing' job and writing Broadway's next hit musical. At lunch, Gordon collapses into his meal and wakes up in the hospital, surrounded by his maritime-enthusiast boyfriend, his overbearing mother, a co-worker, and a team of medical professionals. Thought to have a tumor inside his brain, Gordon finds the courage to confront not only his mortality as he agrees to the necessary yet life-threatening surgery, but also the specter of Mr. Bungee and the music still left unwritten.

The story of A New Brain is drawn from Finn's own life. Back in 1992, shortly after the successful opening of Falsettos on Broadway — the culmination of years of work — Finn suffered a brain seizure and was hospitalized. During this painfully difficult time, his doctors could not immediately pinpoint the cause of the seizure and were not sure if he would survive. Finn also feared that, even if he lived, he still might lose his ability to write. From such dire source material came this surprisingly joyous and funny musical.

Please note A New Brain explores mature themes and contains adult language. A New Brain may not be suitable for patrons under the age of 13.