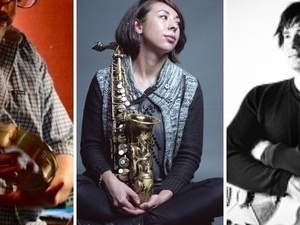 With more than 65 years in music, Tony Martucci has cultivated an original and interpretive drum style that is both supportive and interactive, reflecting his deep understanding of the jazz tradition and his vast stylistic influence. He is a creatively skilled accompanist and a soloist of unusual melodic depth.

Tony has performed and recorded with some of the greatest names in music. His extensive discography includes four critically acclaimed recordings under his own name. HIs most recent release on Sound Judgment Records, "Ancestral Voices '' is being celebrated for its vision and uncompromising creativity. I

Martucci is an adjunct professor of music at Virginia Commonwealth University, where he teaches drum set, Latin percussion, and small jazz ensemble. He has been a teaching artist for the Washington Performing Arts Society, and a founding member of The Capitol Jazz Project. Tony is also a teaching artist for the Kennedy Center Jazz Outreach program.

Sarah Marie Hughes is a performing artist who resides in Maryland. She plays the saxophone, flute, and clarinet and also creates on guitar and piano. Her improvising vocabulary is influenced by jazz music and contemporary improvisation.

She received a master's degree in jazz saxophone performance from the New England Conservatory in Boston where she studied with Jerry Bergonzi, Donny McCaslin, Ran Blake, Anthony Coleman, and Ben Schwendener.She has shared the stage with an impressive list of jazz luminaries, including Lee Konitz, Dan Tepfer, Matt Wilson, Michael Formanek, Freddie Redd, Mary Halvorson and Alison Miller.  She also shared the bills with great improvisers, including Joe Morris, William Parker, Hamid Drake, Daniel Carter and Fay Victor. In 2015 she traveled to Sweden with Amy K. Bormet's ensemble Ephemera, to participate in their first Women in Jazz Festival.

In 2019 she released her second album, The Drag, which includes performances of Sarah's graphic scores and improvised singing/reading of her prose. Also that year, she participated in an interdisciplinary collaboration at the D'Clinic Studio Residency in Zalaegerszeg, Hungry that resulted in the creation of a book of her visual art and stories and an interactive exhibition of sound, music, and performance art.

John Lee is a composer and guitarist who is active in the Washington D.C. music scene. He earned a BFA in Jazz Performance from the Mannes Jazz and Contemporary Music Program at the New School. He has performed with a host of major artists, including Cyro Baptista, Fatoumata Diawara, Hassan Hakmoun, Matisyahu and Keller Williams.

As one of D.C.’s most sought-after musicians and as founder of the jam band Caveman, Lee can be heard on over 20 albums as sideman and on five as leader. His stylistic versatility has taken him to venues and festivals around the world.

A limited number of in-person seats are available for $20 each.
Proof of COVID-19 vaccination is required at the door.

Streaming cost is $10
Donations are welcomed.
The link will be revealed to live stream participants 15 minutes before the show
and will remain active through Sept 25

Spontaneous Composition is a hallmark of this multi-generational trio. Drawing upon decades of collective creative music experience, Tony Martucci, Sarah Hughes and John Lee create sonic landscapes replete with evocative melodies, and harmonically drenched rhythms. These fearless improvisers invite you to join what promises to be a most memorable musical experience.

A limited number of in-person seats are available for $20 each. Proof of COVID-19 vaccination is required at the door. Streaming cost is $10 Donations are welcomed.