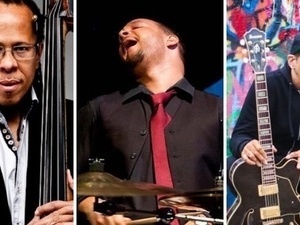 Born and raised in Washington, D.C., Mark Prince has developed into one of the premier drummers in today’s music scene. Honing his skills at Howard University under the expert tutelage of the legendary Grady Tate, as well as maintaining a strong classical background as a National Symphony Fellowship recipient, his versatility is a sought-after attribute amongst the musical community both nationally and internationally.

Upon graduating from Howard University, Mark began a six-year stint with cutting-edge keyboardist Andy Milne. His time with this band served as a rewarding platform of development, being thrust into the complex, but intensely groove-driven arena of M-BASE music, a fusion of funk, jazz, astrology, mysticism, and any other pertinent influence, was a perfect match for Mark’s unique style of drumming.

His early musical experiences include performing, in his native Detroit, with Dr. Morris Lawrence (prize pupil of Sidney Bechet) and his Afro Musicology big band. He also performed with members of the original Funk Brothers Motown House band. Upon arriving in Philadelphia in the mid-nineties, Dave broke ground working with international Dj’s King Britt and Josh Wink. He taught Jazz Improvisation and private students, as an adjunct professor at Eastern University Music School, while touring and performing, for over 10 years.

Dave continues to develop a fresh synthesis of musical styles from Jazz, Soul, Rock, Latin, and Electronica. His infectious energy is apparent in his live performances and recordings. Dave has two new records out on https://davemanleymusic.bandcamp.com

In addition to his personal musical career, Michael is deeply involved in developing children’s music enrichment. He is a certified teacher in Washington D.C.’s Public School system at Oyster-Adams Bilingual Campus. As a lecturer and associate professor, he has taught at Shenandoah Conservatory, Michigan University, University of Missouri, Fillmore Arts Center and Bowie State amongst others. In addition, he has worked with the Wolftrap Institute for Early Childhood Learning program in Virginia, The Smithsonian Masterworks Orchestra, and the Thelonius Monk Institute.

Streaming cost is $10
Donations are welcomed.
The link will be revealed to you 15 minutes before the show
and will remain active through May 18